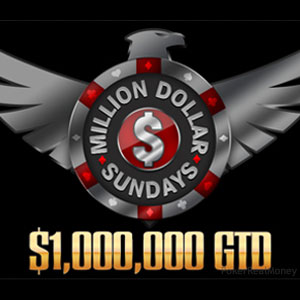 The USA-friendly Winning Poker Network has announced that it will continue hosting its Million Dollar Sunday tournaments on a permanent basis despite having to cover hefty overlays in the past for the guaranteed $1 million events.

That’s good news for online poker players in the US who like to play MTTs that offer massive prize pools. No other poker sites currently available to Americans are hosting tournaments with that kind of cash up for grabs for players who finish in the money.

The Winning Poker Network (WPN) that includes Americas Cardroom and Black Chip Poker has hosted more than a dozen Million Dollar Sundays since the beginning of 2018. Each and every one added value to participants in the form of overlays when the $1 million guarantee was not reached. The combined total of extra money that has landed in players’ pockets this year has now surpassed $2 million after another juicy overlay last Easter Sunday.

Another bonus for players is that the Million Dollar Sunday buy-in is only $250 + $15. That entry fee has been more than halved since WPN first began hosting $1,000,000 guaranteed tournaments back in 2015 under the “Winning Millions” banner.

The buy-in for the first Winning Millions was $500 + $40 and remained at that price as the tournament was offered on a sporadic basis. It wasn’t until October 2017 that the entry fee was reduced to a more affordable $265 and it has been stated that the lesser buy-in amount will remain for the permanent Million Dollar Sundays that now kick off at 3:00 p.m. (ET).

Plenty of MDS Seats Available Via Satellites and Qualifiers

Of course, that $265 buy-in is still a bit steep for players on a low budget who would love to take a shot at winning a chunk of that $1,000,000 prize pool. In order to appease those players, WPN has increased its offerings of satellites to the MDS tournaments, allowing players the opportunity to win a seat to the big dance for just a fraction of the actual $265 entry fee.

For instance, players can qualify for as little as $5.50 in a Hyper Turbo event that guarantees at least three seats to a MDS satellite. Or a $22 Deepstack Turbo that will send at least 10 players on to the next step in aiming for a Million Dollar Sunday seat.

Other options include the Mega 25 Seats Guaranteed that’s set for 5:30 p.m. ET each Friday with an entry fee of $16.50. Or the Mega 50 Seats Guaranteed at the same time and buy-in on Saturday. Sunday at 12:00 noon, three hours before the Million Dollar Sunday gets underway, the Mega 150 Seats Guaranteed will run for a $44 buy-in. All told, there are 225 MDS seats to be won each week in the satellite tournaments.

The abundance of opportunities to grab a seat at the Million Dollar Sundays poker table for just a few bucks and to perhaps win some life-changing money is a temptation that improving and serious poker players find hard to resist. Add to that the value received in the anticipated overlay and it becomes almost foolish to not take a shot at winning a seat for this Sunday’s big tournament.