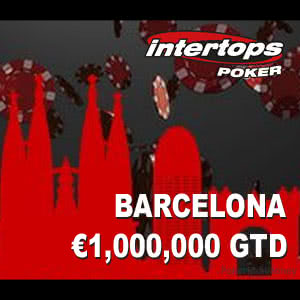 Intertops Poker is running a promotion offering players the opportunity to win a package to the opening event of the Barcelona MILLIONS in April. The target event has a €1 million guaranteed prize pool, yet you could win your buy-in, accommodation and $700 towards traveling there for just $1.10.

The Barcelona MILLIONS is going to be a massive live tournament series. The schedule features a €10 million guaranteed Main Event and five €2 million guaranteed High Roller Events; and, in total, there will be more than $28.5 million on the tables during eight days of action between April 7th and 15th.

Some players may be familiar with the venue – the Casino Barcelona – as it has hosted some of the biggest live poker tours in history. These include the PokerStars-sponsored European Poker Tour, the European Masters of Poker, and the World Poker Tour (WPT) Spanish Championships.

The forthcoming Barcelona MILLIONS is being marketed as a PartyPoker-sponsored event, and although European players can qualify online for the Main Event, the same opportunity does not exist on PartyPoker´s regulated US platform. Therefore, for players in the US, the only way to win a trip to the Barcelona MILLIONS is by playing at Intertops Poker.

The buy-in for Step 1 is $3.30, but if you want to bypass that Step and move straight onto Step 2, you can buy directly into Step 2 for $11.00. Alternatively, you can bypass both the qualifying steps and buy directly into the “Satellite Final”, or win your seat in a “Wild West Shootout” that takes place at on the same morning – but you will have to get up early as the “Wild West Shootout” starts at 7:00am!

The “Wild West Shootout” gives you the opportunity to qualify for the “Satellite Final” for a buy-in of just $1.10. Rather than having a shootout format, the satellite has a hyper-turbo structure with small starting chip stacks and blinds that increase steeply every level. Unlimited re-buys are available before the first break, but you will still need a fair amount of luck to qualify for the Satellite Final.

What´s Included in the Winner´s Package?

The winner´s package is really good. You win the buy-in to the €1 million guaranteed Barcelona MILLIONS Event #1, plus five nights at the closest hotel to the Casino Barcelona – the Hotel Arts – and $700 towards traveling to Spain. Intertops Poker will pay the casino directly for the tournament buy-in and pay the hotel for your accommodation. The $700 towards your travel costs will be paid into your online account once you send Intertops Poker a receipt for your flight booking.

There are a few conditions attached to the promotion you might want to know about before taking part. For example, the Barcelona MILLIONS Event #1 is a must-play event. This means you cannot sell your package or ask the site to exchange it for cash. If you do not play in the event, you will forfeit your prize. Also, you will be required to wear an Intertops Poker badge throughout the tournament, so expect some dumb comments from players who believe the Barcelona MILLIONS is a PartyPoker-exclusive event.

If, despite the conditions attached to the promotion, you fancy giving it a shot, head over to Intertops Poker today where the first of the Step 1 sub-satellites have just started (Step 2 satellites start on Thursday). If you have never played at the site before, please read my review of Intertops Poker for instructions on how to qualify for a 200% first deposit bonus up to $1,000. The procedures for claiming the bonus are not the same as on most other poker sites, so be sure to click on the link at the top of my review page to confirm your eligibility. Good luck at the tables.