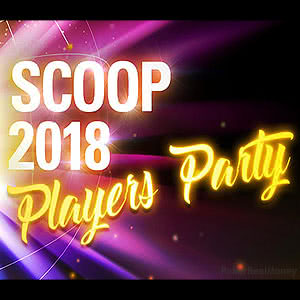 Commemorating the 10th Anniversary of the Spring Championship of Online Poker (SCOOP), PokerStars has announced a Players Party on May 21 that will award thousands of dollars in cash and prizes to players who competed in SCOOP tournaments and earned free Spin & Go tickets.

To be eligible to participate in the Players Party, PokerStars’ players need only enter any SCOOP event during the festival’s May 6-21 run to receive one ticket. Finishing in the money in any SCOOP event is worth five tickets, while the winner of each SCOOP tournament will be awarded 10 tickets.

Those tickets are free entries to special Spin & Gos that will be available on May 21 and will award prizes up to $100. While the SCOOP Players Party begins at 14:00, PokerStars has not set an ending time for the party, but instead advises that the bash will continue “until all SCOOP Players Party tickets have been used or have run out.”

Any party that I’ve ever been to that goes on indefinitely always tends to attract party animals, and the SCOOP Players Party is no different. PokerStars has let it be known that the player who wins the most Spin & Go’s will win a prize of $5,000 and be crowned the SCOOP Party Animal.

The four players next in line in Spin & Go wins during the Players Party will each receive $1,000. Obviously, the more tickets won during SCOOP, the better the odds of parlaying those free tickets into cash and other prizes that include additional Players Party Spin & Go tickets, as well as standard Spin & Go Tickets.

Obtaining Tickets During the Players Party

There are other ways to earn Players Party tickets while the party is going on. Simply opt-in through your Challenges Window and play five Spin & Go’s priced at at least $1 to receive three tickets. Another three tickets will be credited to opted-in players who play 100 No Limit Zoom hands at $0.05/$0.10 stakes or higher.

Use Them Or Lose Them

SCOOP Party Tickets will appear in player accounts on May 21. Use them by clicking on the Spin & Go tab once the party gets underway. Any tickets that go unused after the Players Party is declared to be over will become null and void.

The SCOOP Players Party is PokerStars’ way of celebrating the 10th anniversary of its most popular online poker festival. It’s a closing ceremony of sorts that will award thousands of dollars in prizes on top of the more than $65 million to de dished out during SCOOP.