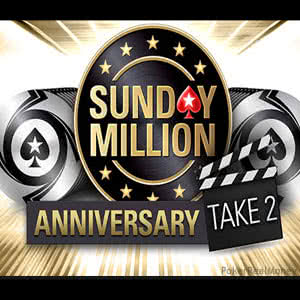 A huge overlay during the first running of the $10 million guaranteed Sunday Million 12th Anniversary special in February hasn’t stopped PokerStars from offering a second version of the event and the world’s top poker site announced it will “Take 2” on April 22.

Many in the poker community were shocked when PokerStars (review & marketing code here) announced that it would increase the prizepool of its 12th Anniversary Sunday Million this year from $1 million to $10 million – yet keep the buy-in the same at $215. That shock was doubled when the event was held Super Bowl Sunday on February 4 and a massive overlay of more than $1.2 million resulted in tons of value for 43,975 entrants that consisted of 34,274 unique entries and an additional 9,701 re-entries.

Absorbing that big of an overlay would presumably hurt the bottom line of The Stars Group, wouldn’t it? Apparently not, because PokerStars has elected to offer a Sunday Million 12th Anniversary Edition: Take 2 with a $10 million guarantee and also the same $215 entry fee.

The tournament is scheduled to go down on April 22 at 14:00 ET with the first place prize a guaranteed $1,000,000. The rest of the in the money finishers will be awarded at least $9 million more in prize money, and that amounted to 7,333 players during Take 1.

There is more good news to get excited about regarding the special Take 2 anniversary tournament next month. One lucky player will receive a Platinum Pass valued at $30,000, compliments of PokerStars.

After the late reg period is over and registration for the Sunday Million 12th Anniversary Edition: Take 2 is fully closed, PokerStars will randomly select some of the late registrants to participate in an instant tournament. The winner of the instant tournament will be awarded a Platinum Pass that includes expenses for travel, hotel accommodations, and entry into the PokerStars Players No Limit Hold’em Championship set for January 2019 in the Bahamas.

How many entrants to the tournament might there be for this second running of the event? Will the $10 million guaranteed Take 2 tournament and the $30,000 valued Platinum Pass giveaway be enticement enough for the guarantee to be reached this time, also considering that there will be no Super Bowl played on April 22?

If not, PokerStars will once again be on the hook to dish out an overlay, which is added value to multi-tournament players above and beyond the prize pool guarantee. Also of value is PokerStars’ popular Spin & Go game where $5 can win you $1,000,000 in a matter of minutes, as well as a seat in the Sunday Million 12th Anniversary Edition: Take 2 tournament.

The $5 limited edition Spin & Go tournaments are running now until the day of the $10 million guaranteed tournament on April 22.