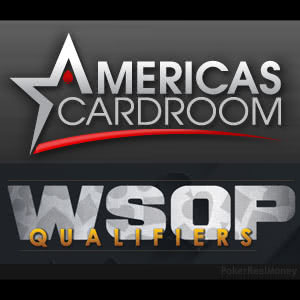 The 49th annual World Series of Poker begins next month in Las Vegas and Americas Cardroom has announced that 50 guaranteed WSOP Main Event packages worth $12,500 will be up for grabs via multiple qualifiers that will be running from April 22 thru June 24.

The WSOP Main Event is poker’s most prestigious tournament every year and features a $10,000 buy-in and millions of dollars in prize money. The entire final table of nine players will earn at least $1 million, with the winner likely to take home $8 million or more depending on the number of entrants.

While competing in the WSOP Main Event is practically every poker player’s dream and the experience of a lifetime, Americas Cardroom realizes that some players perhaps won’t be able to make the jaunt to Vegas on July 2 to play in the tournament. Therefore, winners of the 50 guaranteed prize packages have the option of taking the $12,500 in cash instead!

The $12,500 of each package covers the $10K buy-in and kicks in $2,500 for travel and hotel expenses. Winners will receive the cash in their ACR accounts immediately after securing a WSOP package and can spend the money according to their whims and desires.

The guaranteed WSOP prize package events get underway on Sunday, April 22 at 5:15 p.m. when two $12.5K winners will emerge in the first GTD tournament. Every Sunday of the following nine weeks up to and including June 24 will see at least another 48 Main Event packages won.

The first eight of those 10 weekly quaifiers are 2-package guaranteed events, while the last two Sundays combined will make WSOP Main Event package winners out of 34 players. A whopping 30 prize packages will be doled out on June 17, and four more on June 24.

Here is the qualifier schedule with corresponding entry fees. The start time every week is 5:15 p.m:

The final step will award two $12,500 prize packages, adding to the 50 WSOP prize packages guaranteed in the weekly qualifiers every Sunday.

Yet another way to claim a 2018 Main Event seat – in a matter of minutes – is via the action at the Jackpot Poker tables. For as little as $3, ACR players will be awarded WSOP prize packages.

The odds of winning are even better at the $30 Jackpot Poker tables where 60 out of every 100,000 such games played will send all three players to the WSOP Main Event this year. All told, ACR will dish out at least $625,000 worth of WSOP prize packages in 2018, with players having the option of going to Las Vegas or taking the money in cold, hard cash.