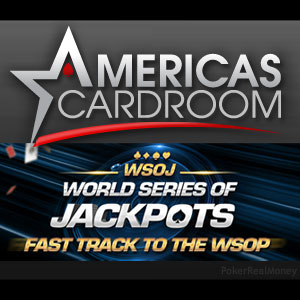 Americas Cardroom has reintroduced its World Series of Jackpots promotion, offering players the chance to win a seat in the WSOP Main Event for just $3.00.

Last year, Americas Cardroom sent more than sixty players to the World Series of Poker Main Event through various promotions – the most popular of which was the World Series of Jackpots. This year, the site is hoping to surpass last summer´s fantastic achievement by reintroducing the promotion two months earlier.

In another change to last year´s promotion, Americas Cardroom is – at present – only offering World Series of Jackpot games with a $3.00 buy-in. This should drive players who would have normally participated at higher buy-in levels to the $3.00 games, and increase the number of times a package to the World Series of Poker is won.

How the World Series of Jackpots Works

The World Series of Jackpots is based around Americas Cardroom´s popular three-handed hyper-turbo Jackpot Sit & Go games in which a random prize is selected prior to the start of each game. However, unlike the “regular” payout structure for the Jackpot Sit & Go games – in which the winner takes all – there are some significant variations in the distribution of the prizes.

Americas Cardroom forecasts that the frequency of players hitting the Jackpot will be six in every 100,000 games. Although these are not fantastic odds, the rewards for spinning a Jackpot prize are fantastic compared to the buy-in. Don´t forget, players also have the opportunity to win a cash prize each time they play in the World Series of Jackpots.

Not the Only Big Prize for a Small Buy-In

Americas Cardroom is home to the most valuable online poker tournament open to players in the US – the Million Dollar Sunday. Recently the site announced that its next $1 million guaranteed event would be played on Sunday 24 April and started running satellites and promotions to encourage players to qualify early for the $540.00 buy-in tournament.

According to a report on USAFriendlyPokerSites.com, one player took full advantage of the “Spin to Get IN” promotion by booking his seat in the Million Dollar Sunday event for just $0.12. Incredibly, the player – Kevin “CrazyRiver1” Johnson – was playing the “Spin to Get IN” game at its lowest $0.01 level, and lined up three cards with the same value on his twelfth spin to win his seat.

Players considering taking advantage of the Easter holidays to either qualify for the WSOP Main Event or the Million Dollar Sunday should not miss the opportunity to boost their bankrolls with Americas Cardrooms Easter reload bonus offer of a 200% bonus on reload deposits up to $500.00.

The offer runs from today until midnight on Sunday (ET) and, to benefit from the reload bonus, players should enter the Americas Cardroom bonus code “BUNNY” when asked for a promotional code in the cashier. Players have thirty days in which to clear the bonus – which is released in increments of $5.00 for each 120 Award Points earned at the tables.

If you are not already playing at Americas Cardroom, and would like to find out more about the site before participating in the World Series of Jackpots promotion, have a read of our Americas Cardroom review. The review is packed full of vital information for new and experienced players that will help determine whether Americas Cardroom is the right online poker site for you.