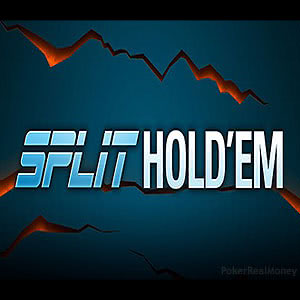 Poker just got a whole lot more interesting and exciting at PokerStars with the launch of a new game entitled Split Hold’em that will require not only a different line of strategic thinking, but is also intended to create more action for players.

Some players who are regular participants in a home game with friends where each player takes a turn dealing the cards under a dealer’s choice format may be familiar with Split Hold’em, but may know the game under a different name such as Double Flop Hold’em. However, Double Flop Hold’em is arguably not the best name for the variant because it’s not only the flop that is doubled, but an entire row of five community cards.

In other words, the game consists of the same basic rules as the traditional and popular Texas Hold’em, but two sets of community cards will be utilized. The pot is split between the player with the best hand using the top board and the player making the best hand with the bottom board.

Of course, one player can scoop the whole pot without splitting, but would have to win on both rows of community cards. Players are still dealt only two hole cards and may use them on both boards.

Play Split Hold’em While You Can

PokerStars’ introduction of Split Hold’em marks the first time that the game has been offered online. It will be available only in cash game action and the announcement by PokerStars included the caveat that Split Hold’em will only be dealt for a limited time.

However, if players take a liking to the game, I’m sure that PokerStars will relent and make Split Hold’em a permanent offering in the lobby.

The ability to play two boards instead of one practically guarantees that play will be “looser” and more money will make it into the pot. While the majority of pots will be split, a clean sweep on both boards will certainly be thrilling for players – as well as a big bankroll booster.

If you happen to play a lot of poker, you know that sometimes the game can get a bit monotonous and stale. That’s why it’s important to try things that may be fresh and exciting, and that can spark some energy. Split Hold’em falls under that category, especially for recreational players, who are keen to play a lot of pots to begin with.

We have different reasons why people …. will want to have something different, so we’re trying to cater to these different needs.

Along with rolling out the new poker variant, PokerStars will also try something new with a “Seat Me” system that eliminates bum hunting and seating scripts. Players will not select a table and seat as has been the norm, but will instead choose their game and desired stake level.

Players will then be whisked to an open seat as per their preference. If no seats are available, placement on a waiting list follows.

The Seat Me concept levels the playing field and is more synonymous with a live poker experience in a casino or poker room where table and seat selection are random.