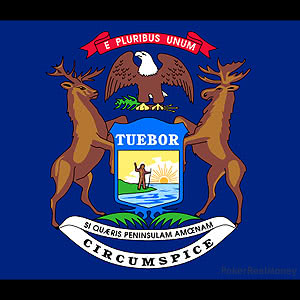 Michigan made progress toward online poker and gambling legislation in 2017 and although the first three months of 2018 passed without any movement, a new bill drafted by lawmakers puts the Great Lake State back in the forefront among states aiming to approve i-gaming regulation.

Michigan State Senator Mike Kowall pushed for passage of Senate Bill 203 last year and found takers when the Senate Regulatory Reform Committee approved the bill. However, the state’s Indian tribes balked, expressing serious misgivings about the extent of their participation in the proposal.

Kowall’s limited success prompted State Representative Brandt Iden to draft and propose House Bill 4926 from the other side of the aisle where it found some favor at an informational hearing before the House Regulatory Reform Committee, yet needed a considerable amount of work before committee members would throw their support behind the measure. Iden amended his proposal and re-introduced the bill before the same committee in December where it surprisingly passed on a 12-3 vote.

Since that time, it may have appeared to some that progress had been stymied due to the concerns of native tribes, but both bills were still alive and talks continued behind the scenes among the stakeholders involved. Those talks have now resulted in the drafting of a new version of SB 203 that, if approved, would regulate online poker and casino games, according to Gambling Compliance Research Director Chris Krafcik.

The amended bill has the backing of the office of Republican Senate Majority Leader Arlan Meekhof, who provided input on the proposal. The current draft does not include sports betting and daily fantasy sports, but could be amended to incorporate those wager offerings before being reintroduced for a vote.

The proposal does mention that Indian tribes would need to form and develop commercial online gaming entities in order to participate and apply for licenses. Hopefully, unlike other states such as California, the divide between tribal casinos and commercial casinos can be bridged in order that common ground can be found among all gaming interests involved.

Now that SB 203 has been given new life, it is not out of the question for HB 4926 to follow the same path. Nor is it out of the realm of possibilities that the November 2018 ballot includes the referendum that gives Michigan citizens the choice on whether or not they favor online poker and gambling.

Also of note is that the US Supreme Court is set to rule on sports betting in the near future. A favorable decision for New Jersey could prompt an expanded version of SB 203 that does includes sports betting, with the bill possibly being put on a fast track in order to take advantage of new laws that would allow states across America to offer wagers on sports.

There remains much work to be done for Michigan to join Nevada, Delaware, New Jersey and Pennsylvania in approving regulated i-gaming. But it appears that the state’s lawmakers are intent on moving forward in that regard.